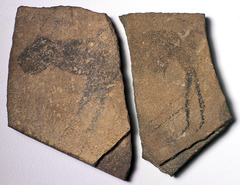 1. Apollo 11 Stones
Location: Namibia
Artist: N/A
Date: 25,500 – 25,300 B.C.E
Culture: (probably) ancient South African
Period/Style: Prehistoric, Paleolithic
Material/Technique: Charcoal on stone
Theme(s): animal representation, records,
Form: An animal that looks like a bovine can be seen on the stone. The use of lines and shape are displayed in the entire figure. However, keep in mind that during this time period a limited amount of supplies were available to people.
Function: Probably to keep record of what was seen or killed.
Content: Figures of animals
Context: Found in the Apollo 11 Cave in the Huns Mountains of southwestern Namibia with unusual precision for ancient rock art. The stones are engraved with geometric line designs and representations of animals. 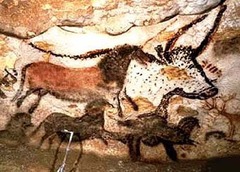 2. Great Hall of the Bulls
Location: Cave walls near Lascaux, France
Artist: N/A
Date: 15,000-13,000 B.C.E
Culture: (probably) ancient French
Period/Style: Prehistoric, Paleolithic
Material/Technique: Rock painting; contours to show volume of the animals
Theme(s): Hunting, survival, food
Form: Color is used to distinguish one animal from another. Lines and shapes are used to show figures of animals. Movement can also be seen in the running bulls. Scale was probably used to bring attention to more important/significant animals.
Function: Prehistoric hunters believed that they had control of the animals by painting them on the walls. They also believed the more lifelike the animal was, the more magical power the animal had. Maybe, the art was used to keep record of hunting events and kills.
Content: Bulls and other animals running.
Context: The painting took place in France, and has to do with hunter-gatherer society, concerns with food, survival, and procreation. 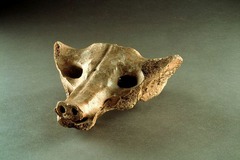 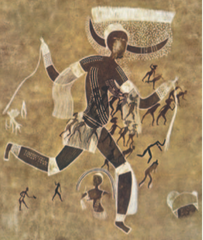 4. Running Horned Woman
Location: Tassili n’Ajjer, Algeria
Artist: N/A
Date: 6,000-4,000 B.C.E
Culture: (probably) ancient North African
Period/Style: Prehistoric, Neolithic
Medium/Material: Pigment on rock
Theme(s): supernatural beings, ceremony/ritual
Form: The use of color, shape, lines, scale, and space are utilized to form the Horned Women and her surrounding figures. Movement is evident as she is clearly planting her foot for another long stride.
Function: Some scholars have interpreted the woman as a horned deity instead of a human wearing ceremonial headgear.
Content: Either a horned deity or a human is running around, probably for a ceremonial or ritualistic purpose.
Context: It’s made on rock walls and displays varied human and animal activities. 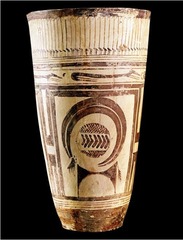 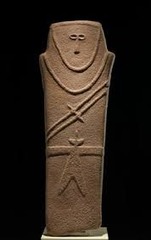 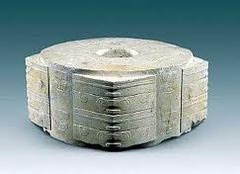 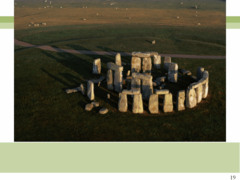 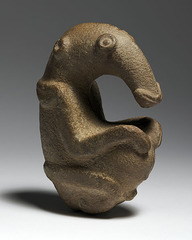 9. Ambum Stone
Location: Ambum Valley, Enga Provine, Papua New Guinea
Artist: N/A
Date: c. 1,500 B.C.E
Culture: (probably) ancient Oceania
Period/Style: Prehistoric, Neolithic
Medium/Material: Greywacke
Theme(s): Birds, pestle
Form: Made out of greywacke, probably to get a rich, brown color to represent the importance of animals.
Function: Considered sacred and credited with supernatural powers by present day people of the region.
Content: A bird-like figure that sits like a human calmly.
Context: It has a higher level of figurative qualities than other pestles and may be in a unique class of its own. 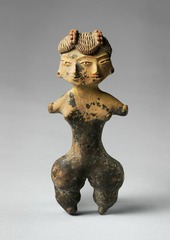 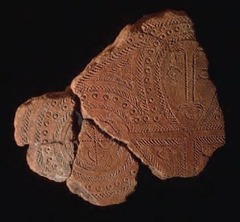 11. Terracotta fragment
Location: Lapita Islands, Solomon Islands, Reef Islands
Artist: N/A
Date: 1,000 B.C.E
Culture: (probably) ancient Oceania
Period/Style: Prehistoric, Neolithic
Medium/Material: incised terracotta
Theme(s): storage, ???
Form: Patterns which include faces and figures, and a red, vibrant color
Function: piece of pottery used for cooking, serving, and storing
Content: Geometric patterns, lines, and shapes.
Context: Lapita art is known for ceramics, which have intricate repeating geometric patterns that sometimes include anthropomorphic faces and figures.
Terracotta Fragment
Stele
stone markers to denote important religious or civic sites or to be used as burial markers
abstraction
Art that does not depict an actual person, place or thing as it looks in the real world.
acropolis
A “high city” – generally the most important area of the city which would be built on a hill
anthropomorphic
ascribing human characteristics to nonhuman things
burin
A pointed tool used for engraving or incising.
composite view
See twisted perspective.
contour line
outline of a figure or shape
cromlech
A circle of monoliths. Also called henge.
dolmen
Several large stones (megaliths) capped with a covering slab, erected in prehistoric times.
frieze
A broad horizontal band of sculpted or painted decoration near the top of the object
ground
A coating applied to a canvas or some other surface to prepare that surface for painting; also, background.
ground line
In paintings and reliefs, a painted or carved base line on which figures appear to stand.
handthrown
Pottery object not made on a pottery wheel.
ideogram
A simple, picture like sign filled with implicit meaning.
incise
To cut into a surface with a sharp instrument; also, a method of decoration, especially on metal and pottery.
lintel
A beam used to span an opening.
medium (media)
The substance or agency in which an artist works; also, in painting, the vehicle (usually liquid) that carries the pigment.
megalith (adj., megalithic)
Literally, “great stone”; a large, roughly hewn stone used in the construction of monumental prehistoric structures. See also cromlech, dolmen, menhir.
menhir
A prehistoric monolith, uncut or roughly cut, standing singly or with others in rows or circles.
Mesolithic
The “middle” prehistoric period, between the Paleolithic and the Neolithic ages.
monolith
A column that is all in one piece (not composed of drums); a large, single block or piece of stone used in megalithic structures.
monumental
In art criticism, any work of art of grandeur and simplicity, regardless of its size.
mural
A wall painting; a fresco is a type of mural medium and technique.
naturalism
The doctrine that art should adhere as closely as possible to the appearance of the natural world.
Naturalism, with varying degrees of fidelity to appearance, recurs in the history of Western art.
Neolithic
The “new” Stone Age, approximately 7000-3000 B.C.
Paleolithic
The “old” Stone Age, during which humankind produced the first art objects beginning ca. 30,000 B.C.
pigment
An insoluble powder that is mixed with water, oil or another base to produce paint
Popul Vu
Mayan creation story
provenance
A record of ownership of a work of art used as a guide to authenticate it.
radiocarbon dating
Method of measuring the decay rate of carbon isotopes in organic matter to provide dates for organic materials such as wood and fiber.
sarsen
A form of sandstone used for the megaliths at Stonehenge.
Sculpture in the round
Freestanding figures, carved or modeled in three dimensions – not attached to another surface (except
a base)
silhouette
a portrait in profile showing the outline only and filled in with black
slip
A suspension in water of clay and/or other materials used to coat the outer part of a piece of pottery in the production of ceramic ware.
stylization
The decorative generalization of figures and objects by means of various conventional techniques. In other words, a repetition of the same look, whether within a geographic area or by a particular artist.
Subtractive sculpture
Sculpture technique in which materials are taken away from the original mass, i.e., carving
sympathetic magic
magic predicated on the belief that one thing or event can affect another at a distance as a consequence of a sympathetic connection between them -like a voodoo doll.
twisted perspective
AKA Composite View – a convention of representation in which part of a figure is shown in profile and
other part of the same figure is shown frontally.
Trilithon
A pair of monoliths topped with a lintel; found in a megalithic structure