Cell Body
Life support center of the neuron.
Dendrites
Branching extensions at the cell body. Receive messages from other neurons.
Axon
Long single extension of a neuron, covered with myelin sheath to insulate and speed up messages through neurons.
Terminal Branches of the Axon
Branched endings of an axon that transmit messages to other neurons.
Depolarization
occurs when positive ions enter the neuron, making it more prone to firing an action potential.
Hyperpolarization
occurs when negative ions enter the neuron, making it less prone to firing an action potential.
Threshold
when the positive ions outweigh the negative ions and the neuron fires
Refractory Period
After a neuron fires an action potential it pauses for a short period to recharge itself to fire again.
Sodium-Potassium Pump
pump positive ions out from the inside of the neuron, making them ready for another action potential.
Synapse
a junction between the axon tip of the sending neuron and the dendrite or cell body of the receiving neuron. This tiny gap is called the synaptic gap or cleft.
Reuptake
Neurotransmitters in the synapse are reabsorbed into the sending neurons through the process of _______. This process applies the brakes on neurotransmitter action.
Process
1. Dendrites receive a neurotransmitter
2. Neurotransmitters hyper/depolarize the cell
3. Cell reaches threshold and fires
4. Action potential travels down the axon
5. reaches terminal branches that release neurotransmitter
6. Binds to dendrites on next neuron
What are serotonin pathways involved with?
mood regulation
What are Dopamine pathways involved with?
diseases such as Parkinson’s and Schizophrenia 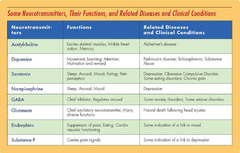