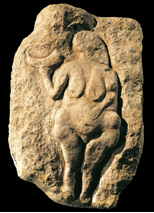 Woman holding a bison horn, from Laussel, France
25,000-20,000 BCE
Painted limestone
1’6″ high
One of the oldest known relief sculptures depicts a woman who holds a bison horn and left arm draws attention to her belly. 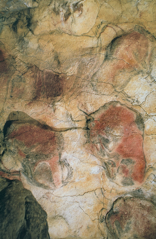 Bison, detail of a painted ceiling in the cave of Altamira, Spain
13,000-11,000 BCE
Standing bison 5′ 2.5″ long
no ground line or indication of setting.
sole concern was to represent the animals not to locate them in a specific place.

Spotted horses and negative hand imprints, wall painting in the cave at Pech-Merle, France
23,000-22,000 BCE
11′ 2″ long
Purpose and Meaning unknown. think the painted hands near the Pech-Merle horses are “signatures” of community members or of individual painters.

Rhinoceros, wounded man, and disemboweled bison, painting in the well of the cave at Lascaux
16,000-14,000 BCE
Bison 3′ 4 1/2″ long
Constitute the earliest example of narrative art ever discovered. Stone tower built into the settlement wall, Jericho
8,000-7,000 BCE
Protecting Neolithic Jericho were 5′ thick walls and at least one tower 30′ high and 33′ in diameter contructed of stone laid without mortar 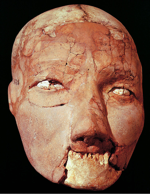 Human skull with restored features, from Jericho
7200-6700BCE
Modeled in plaster, painted, and inlaid with seashells.
Life-size.
Farmers removed the skulls of their dead before burial, modeled them in plaster, and inlaid the eyes to create lifelike “portraits” of their ancestors.

Deer hunt, detail of a wall painting from level III
5750 BCE
Painter depicted human figures as a composite of frontal and profile views, the most descriptive picture of the shape of the human body. became the rule for millennia.

restored view of Catal Hoyuk
6000-5900 BCE
Houses in the early city adjoined with one another and had no doors. Openings in the roof provided access to the interiors.

Landscape with volcanic eruption, Catal Hoyuk, Turkey
6150 BCE
detail of a watercolor copy of a wall painting from level VII.
First known landscape painting in which neither humans nor animals appear. 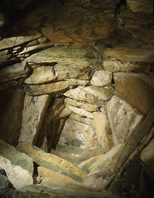 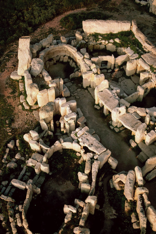 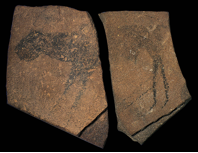 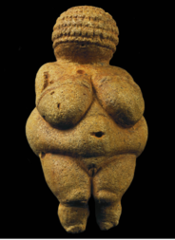 Nude Woman (Venus of Willendorf), from Willendorf, Austria
28,000-25,000 BCE
Limestone
4 1/4″ high
typical of Paleolithic representations of women, whose child-bearing capabilities ensured the survival of the species. 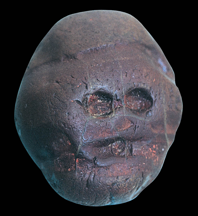 Waterworn pebble resembling a human face, from Makapansgat, South Africa
3,000,000 BCE
reddish-brown jasperite
2 3/8″ wide
Stone is not an artwork because it was neither manufactured nor modified.