bi
a round ceremonial disk found in ancient Chinese tombs. They are characterized by having a circular hole in the center, which may have symbolized heaven
colophon
a commentary on the end panel of a Chinese handscroll
(such as poetry in praise of what has been read or seen)
Confucianism
a philosophical belief begun by Confucius that stresses education, devotion to family, mutual respect, and traditional culture
Daoism
a philosophical belief begun by Laozi that stresses individual expression and a striving to find balance in one’s life
Literati
a sophisticated and scholarly group of Chinese artists who painted for themselves rather than for fame and mass-acceptance. Their work is highly individualized.
pagoda
a tower built of many stories. Each succeeding story is identical in style to the one beneath it, only smaller. Pagodas typically have dramatically projecting eaves that curl up at the ends.
Porcelain
a ceramic made from clay that when fired in a kiln produces a product that is hard, white, brittle, and shiny
Yin and Yang
complementary polarities. The ________ is a feminine symbol that has dark, soft, moist, and weak characteristics. The ______ is the male symbol that has bright, hard, dry, and strong characteristics. 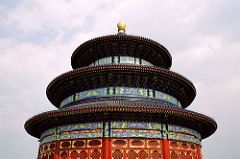 Pagoda, Temple of Heaven
came from the design of the stupa (which traveled along the silk road).
built for a sacred purpose, the ________ characteristically has one design that is repeated vertically on each level, each smaller than the design below it.
In this way, ________ achieve substantial height through a repetition of forms. 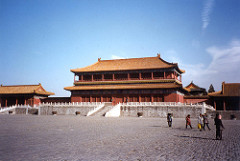 Forbidden City
Largest and most complete Chinese architectural ensemble in existence.
9,000 rooms.
Walls 30-feet high to keep people out and those inside in.
__________ so named because only the royal court could enter.
Each corner of the rectangular plan has a tower representing the four corners of the world.
Focus is the Hall of Supreme Harmony, the throne room and seat of power; wood structure mad with elaborately painted beams; meant for grand ceremonies.
Yellow tile roofs and red painted wooden beams placed on marble foundations unify the structures in the Forbidden City into an artistic whole.
Chinese handscroll
read right to left.
Starts with the title panel, moves to the main scene, and ends with a colophon.
Chinese hanging scroll
main scene on the front and title on the top back
Ma Yuan, Bare Willows and Distant Mountains (late 12th century, Southern Song Dynasty, album leaf, ink on silk)
Intimate works with a poetic, sensitive, and lyrical mood.
Empty space contrasted with precise drawing.
Axe-cut strokes on rock surfaaces
Weeping trees silhouetted in black ink
Subtly graded ink tones
Diagonal organizations
Dong QiChang, Dwelling in the Qingbian Mountains, 1617, ink on paper, Ming Dynasty
_________ as a literati painter, influenced by Daoism
Thick impenetrable spaces alternating with open areas
Mountain forms are strongly presented, yet negative space used to imply presence of clouds
Piling up of forms in a radical arrangement composed of interlocking diagonals and curves
Shitao, Man in a House Beneath a Cliff, ink and color on paper, late seventeenth century, Qing Dynasty
Monk isolated in a forbidding landscape
Inaccessible terrain
Dots of color seem to be arbitrarily placed
Literati painter influenced by QiChang
Bi with Dragons, fourth-third century B.C.E., nephrite, Eastern Zhou Dynasty
Circular jade disk with round center perhaps symbolizing heaven
Dragons are a Chinese symbol of good luck and a bringer of weather in general and rain in particular
Hard jade surface is expertly carved with finely modulated raised spirals and delicately penetrated surfaces