Life cycle
The series of stages that individuals go through in their life, from reproduction through death. Usually this is represented by a circular diagram with each stage shown, and arrows between the stages.
Asexual reproduction
A single individual reproduces without sex, producing a clone of itself. Consequently, the genes of the offspring are identical to the single parent.
Happens in many ways: Single-celled organisms can split in half.
Many plants and some animals can break off a piece of their body and have it re-grow into a new individual.
Fecundity
The potential reproductive capacity of an individual organism or population.
The number of offspring or eggs produced per unit time.
The ability to produce a large number of offspring over a short period of time is when it is high.
In human demography, it is the physiological ability to reproduce, as opposed to fertility, which is the actual rate or number of children born per number of people.
Fertility
The actual rate or number of offspring born per number of individuals.
Winning (or Successful)
A life strategy that produces populations that survive over time, where adults produce enough offspring to replace themselves and those offspring survive to produce their own offspring, and so on.

Thus, the number of individuals in a successful population, would, on average, stay constant or grow over several generations.

Unsuccessful
A life strategy that produces populations that are unable to survive over time, where adults produce few offspring to replace themselves and those offspring do not survive to produce their own offspring, and so on.

Thus the population would have, on average, fewer individuals each generation, which could ultimately culminate in extinction if a better strategy does not evolve

Demographic parameters
Quantitative values that characterize the life history of a species.

Examples are birth and death rates, fecundity, and age at first reproduction.

Known or estimated they can be incorporated into mathematical models to develop hypotheses about life history traits.

In age-structured models, they are often represented in life tables by a standard set of symbols.

Growth rate (r)
The net rate at which a population is increasing (or decreasing) over time, symbolized by r.
If there is no immigration or emigration, it is simply the difference between the birth rate and the death rate for the population.

Per capita birth rate
Calculated by dividing the total births over the time period by the average number of dolphins thoughout the time period, Navg.

Age structure
Characterizes the distribution of ages within a population, which shows either the number or proportion of individuals belonging to each age class.

For species that only reproduce once per year, the natural age class width is one year. For other species, the width of each age class is picked for convenience, depending on what analysis is being done.

Cohort
The group of individuals in a population that were all born at around the same time.

For instance, if a species only reproduces once per year, all the individuals in a population that were born in the same year would be considered part of the same ___

Sessile
An organism that cannot change its physical location.

Almost all plants and fungi because they are rooted in a fixed location, but this term is also used to refer to immobile animals, such as barnacles and mussels, that cement themselves to a rock.

Fitness
Refers to how evolutionarily successful an individual is within a certain environment, relative to other individuals.

In practice, this is often measured as the number of offspring that are produced that themselves grow up to produce offspring. But the theoretical definition includes all future generations that come from the individual, or more generally, the genetic contribution of this individual to future generations.

Clutch size
In birds, the number of eggs laid in one reproductive bout.
Lack
Experiment on clutch size that demonstrated that clutch size was not only affected by food availability but also by other factors, including food supply predictability, nest predation risk, and the parent’s chance of surviving to breed again the following year.
(Life History) Constraint
A physical limitation to the possible types of life history that a species can have.
For instance, limited resources constrain how fast an organism can grow.
Not all need be resource related. For example, a certain body architecture might limit the size that an organism can reach, as is the case for non-woody plants which cannot grow as tall as a typical tree without falling over.
Life History
(of a species) Is defined by the collection of age or stage specific traits (or demographic parameters) directly affecting an individual’s reproductive success. 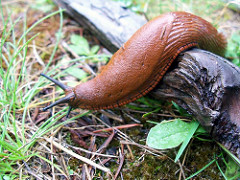 Hermaphrodite
A species where a single individual produces both sperm and egg cells.
In some species, they can actually mate with themselves (both egg and sperm for the offspring come from the same parent).
In other species, individuals can be this but still need to seek out another individual to mate with.

Morphology
Refers to the shape of an organism’s body.
(Life History) Trade-off
The allocation between such desirable but incompatible traits due to physical constraints, maximizing one life history trait (e.g., fecundity) often comes at the expense of another (e.g., longevity).
May vary depending on environmental conditions.

A species life history strategy represents the complete suite of this that have been selected for during its evolution.

For example, energy spent on growth cannot be spent on producing eggs.

Boyce and Perrins
Scientists that hypothesized that individuals lay fewer eggs than the apparently ideal number as a result of year-to-year variation in food availability.
For example, laying 12 eggs in a good year might be great, but in a sparse year it could threaten survival of the entire clutch.

Found that fledging more birds in good years is NOT worth the risk of fledging fewer birds in poor years, when there is high variation in year-to-year food availability.

Life history
The collection of stage or age specific traits or factors directly affecting an individual’s reproductive success.
Birth rate (bx)
The number of births per capita (although many demographers use births per 1000 when reporting on human populations) per unit time (usually one year).

When x = 0 on the life table, it represents the number of births that occurred for this cohort during the first age class—i.e., between the ages of 0 and 10. Because sometimes young do not have offspring.

Fecundity rate (mx or fx)
The average number of offspring per reproductive female per year.
The rate that only considers females that are of reproductive age.
Developing and Developed nations
In developing nations such as India, people generally have more children than in developed nations such as France. Mortality rates also tend to be much higher, particularly infant mortality rates.

Age pyramid
Graph that shows the distribution of various age groups in a population. 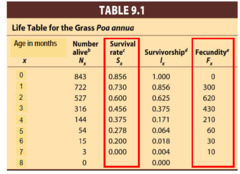 Life Table
Table that summarizes demographic parameters for a species or a population.
– Listed by age, class or stage (x).
The parameters usually include the:
– births (bx),
– deaths (dx),
– fecundity (mx or fx), and
– survivorship (lx)
– mortality (qx)

Survivorship
Roughly the opposite of mortality.
The proportion of a cohort of individuals that survives to a given age.
Dynamic or Cohort (Life table)
One of the methods commonly employed for collecting the fecundity and survivorship values that make up life table data.

It is the preferred one.

Static (Time specific Life table)
One of the methods commonly employed for collecting the fecundity and survivorship values that make up life table data.

It is the simpler one.

A researcher examines a population at a single point in time and assumes that the population’s age structure and all age-related mortality and fecundity schedules are not changing over time.
This is the stable age distribution method and has the benefit of easier data collection.

The drawback is potential inaccuracy, because often the assumption of stability is violated.

Stable age distribution
The age structure of a population that does not change significantly over time.

Most populations will arrive at a this distribution if their demographic parameters are not changing, such as when age-specific birth and death rates stay constant over time.
(Static life table)

Age-specific population size (nx)
The number of individuals in a population of age x is denoted nx, where x gives the age class.

This notation is often used in life tables or when reporting statistics for age-structured populations.

For example, in a life table with 10-year age classes, n30 is the number of individuals in the population that are between the ages of 30 and 40 years old.

lx
Life table symbol that represents the proportion surviving until each age class or stage. 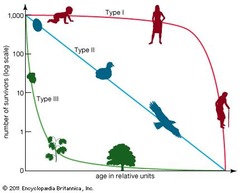 Survivorship curve
A graph that plots age class on the x axis and survivorship on the y-axis.

Can help ecologists make inferences about populations when direct observations are difficult. For example, these curves can be constructed by analyzing skeletal remains. 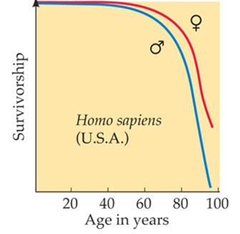 Type I
Species that exhibit high survivorship when young and middle-aged but high mortality in old age. 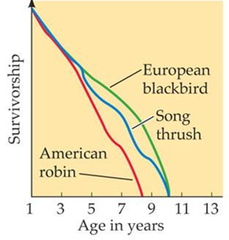 Type II
Those with relatively constant survival at all ages. 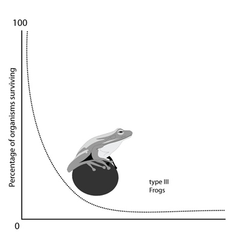 Type III
Species that exhibit high mortality when young and high survivorship when older.
Net reproductive rate (R0)
The average number of female offspring that each female has in a generation.

Used to estimate the growth rate of the population.

The sum of survivorship multiplied by fecundity for each age class:
=∑ [(lx)(mx)]

R0 = 1
Means that each mother is replaced by exactly one daughter in the next generation.

R0 > 1
The population is increasing in size.

For example, if R0 = 2.0, the next generation will be twice as large as the current.

R0 < 1
Each individual that started the cohort has, on average, less than one offspring before dying.

This means the population will decline by that proportion each generation.

For example, an R0 value of 0.7 means that the next generation will be 70% as large as the previous generation.

Generation time (T)
Defined as the average age of a mother producing female offspring, and is calculated according to this formula:

Can also be estimated from fecundity and survivorship data in a life table.